Meet the Americans. No, I’m not talking about California cult cabs or Pinot Noir from the Willamette Valley. I mean real American wines, grown from native and hybrid cultivars. European vinifera grapes have been coming to the United States for centuries now. They are the standard the world over for fine wine grapes. What about the grapes that are native to North America?

While it may continue to be disputed for the next thousand years as to where Leif Erikson made landfall in North America the part of the story, or saga, that is always widely accepted is that the land was so thick with wild grape vines that they hauled an aftership back with them to Iceland filled with grapes. These grapes were likely of the v. riparia class. The North American continent is so abundant in natural resources it shouldn’t be difficult to imagine the land, as yet unspoiled by the hordes of Europeans that would follow, thick with vines bearing fruit.

The Romans are credited with dragging their noble grapes (Cabernet Sauvignon, Chardonnay, Riesling, et al) all over Europe, where, in many cases, they were improved by the more favorable conditions the French would later term terroir. Developed in places like the University of Minnesota breeding program the same is now true of American hybrid grapes. They have been planted all along the Midwest and northern states. These grapes, with the help of time and the winemaker’s experimentation, will continually improve, as did the vitis vinifera grapes of Europe.

In 1976 the rest of the world learned that winemakers on the west coast of the United States were making seriously good wine from vinifera grapes. Prior to that it was widely believed that ONLY European vinifera grapes grown in Europe could be used to make fine wine. A good deal of the wine being made in California during the 1970’s was what people called plonk, or jug wine. We know today that the quality of west coast wines has risen to the highest levels of world class, by any definition. Wines made outside the three westernmost states have not received the recognition they deserve on the world stage.

All wines have improved in quality over the last 50-75 years. Advances in agriculture, technology, and breeding programs have propelled the wine industry in the United States to grow to all 50 states. Breeding programs in university research stations such as in Minnesota and Corning, New York, as well as dedicated private breeders like Elmer Swenson have developed hardy strains of vines more suitable to the colder climates in the midwest and northeast. The Minnesota program formally began in 1972 as the Minnesota Grape Breeding Program at the University of Minnesota. Their program first yielded four hybrid grapes, bred for cold hardiness and decease tolerance – Frontenac, Frontenac Gris, LaCresent, and Marquette, collectively known as the Minnesota Hardy.

These grapes were released for planting to nurseries licensed to propagate the new varieties. Winemakers across the midwest and northeast have been experimenting with these grapes to make all styles of wine from sparkling and still to fortified and dessert. In Corning, NY the grape program goes back to 1974. Some of the grapes released by the program include: Cayuga, Traminette, Noiret, Chardonel, Canadace, Glenora, and Lakemont.

Prior to this amateur horticulturists like Thomas Jefferson and Dr. Daniel Norton were convinced that native American grapes could be coaxed to grow up into fine wines to rival European vinifera. In a lifelong effort to prove his point Jefferson died in debt and penniless, partially due to his unwillingness to give up on his agricultural experiments. Dr. Norton, whose story is muddied by controversy, is credited with discovering the grape many believed would be that great rival to the vinifera. The Norton grape, also known as Cynthiana is not of the v. lambrusco or v. riparia class so prevalent throughout North America. To this day its parentage has never been accurately determined but it is classified as v. aestivalis.

The wines made from the Norton grape are said to be well-balanced between acidity, tannins, and fruit flavors. In 1873 (more than 100 years before the infamous ‘Judgement of Paris’) an international competition in Vienna declared the Norton wine to be “best red wine of all nations”. Today the grape is grown in Virginia, its birthplace, championed by Jenny McCloud of Chrysalis Vineyards. It is the dominant red grape of Missouri, where it has its own cult following. 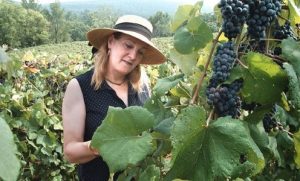 Outside of the three western states there is a renewed interest in native and hybrid grapes. Winemakers all over the country are applying their 21st century knowledge and techniques to make wines in every style. If you have not become acquainted with these wines yet you should seek them out. They are here to stay and coming back onto the wine scene in a big way.

I had a conversation with Lenn Thompson of The Cork Report about an article by Paul Brady, Natives and Hybrids: Should They Co-exist With Vinifera? When the Finger Lakes was first established as a wine producing region it made its name on native and hybrid varieties. When Dr. Frank Konstantin entered the picture in 1962 he worked diligently to convince other growers that vinifera grapes would survive their cold harsh winters. He proved to be right and many vines were ripped out and replaced with vinifera, leaving the old standbys of Niagara, Cayuga, Catawba, and Diamond in the dust. A new guard of young winemakers is falling in love again with local grapes.

So, if your palate has become bored with all the traditional bottlings of “noble” grapes look for wines made from native or hybrid grapes. You can always ask us at New England Uncorked!

In the coming weeks we will attempt to introduce you to some of our winemakers who are producing amazing wines you may never have heard of – Shelburne Vineyard in Vermont, Sunset Meadow Vineyard in Connecticut, Westport Rivers in Massachusetts, Breakwater Vineyards in Owl’s Head Maine, and others.